You are using an outdated browser. Please upgrade your browser to improve your experience.

In your search for a good vacuum, have you ever noticed the technical specifications listed on the vacuum page, such as airflow or water lift, and wondered what they mean? For some, these specifications may be diving into more detail than they are interested in, but for the rest of us, who are curious learners, keep reading as we have explained it all for you below!

(On the SEBO website, you will see these listed on the “Additional Information” tab beneath each vacuum on its product page.)

This should not be confused with suction, which is an air pressure differential that creates force. You can have great suction and still not pick up all the dirt and debris on your floors. To make the difference between airflow and suction a little easier to understand, consider a suction cup that you use to hang ornaments on windows or your razor to the shower wall. When you push the air out of the space beneath the cup it creates an air pressure differential that produces a force, or suction, that holds the cup to the hard surface. However, once the air is pushed out there is no more air movement, or airflow, happening. In this example, you can see how suction and airflow are different.

What does the airflow rate mean? It is one of the most important types of measurements to pay attention to as it represents the power of the airflow from the surface to the bag. As mentioned above, the airflow rate is measured by the volume of air sucked into the vacuum in 1 minute using cubic feet (CFM). The more air flowing through a vacuum, the better, which therefore means that the higher the airflow rate, the higher the cleaning power. An average airflow rating for a vacuum cleaner sits between 50 – 100 CFM. However, SEBO vacuums begin at 103 CFM and go up to 120 CFM! SEBO canister vacuums have a higher airflow rate than the upright vacuums because they need to compensate for the air that needs to move through the length of the wand and hose in addition to the machine itself.

One last thing to mention is that airflow is typically measured with clean filters and bags. As the vacuum filters become dirty over time, and the vacuum bag becomes full, you will notice a natural decrease in airflow. This is why we recommend replacing your filters regularly and replacing the bag as soon as it is full. For the average SEBO vacuum we recommend replacing your filters after approximately every 16 vacuum bag replacements (an easy way to remember is after you go through two boxes of bags), however, the owner’s manual will specify more accurately what is recommended for each SEBO model.

The water lift rating is another important specification for measuring the suction power of a vacuum. It is determined by putting the vacuum hose at the top of a vertical tube and measuring how much water the vacuum can lift in inches within the tube. 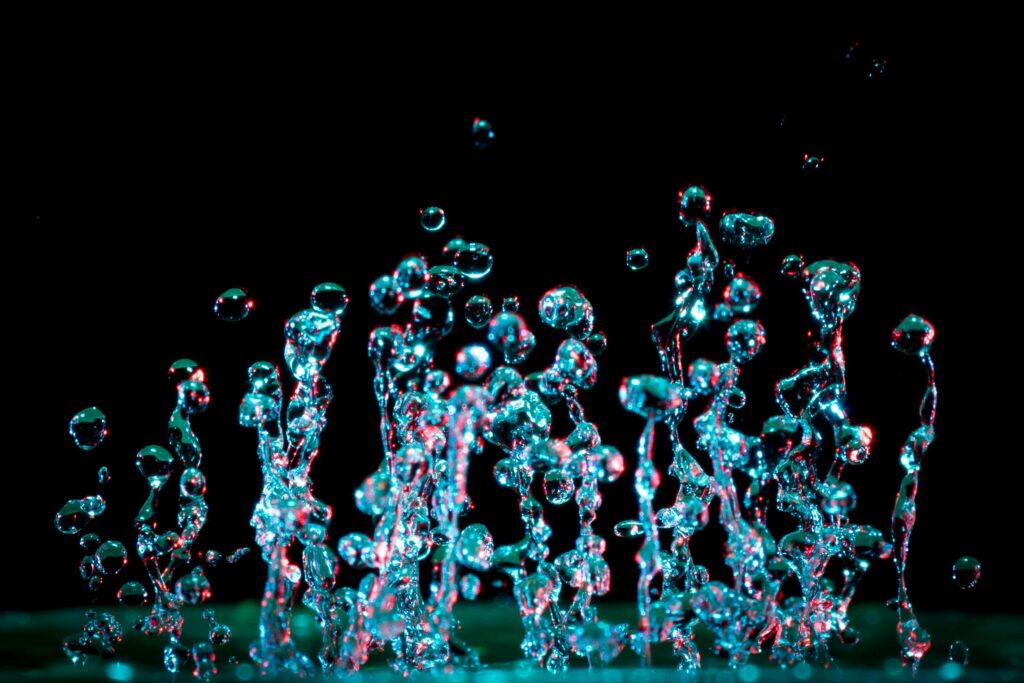 So, while the airflow rating is measuring the amount of air moving through the vacuum bringing dust and particles with it, the water lift rating tells us how much dirt the vacuum can lift off of the ground in order to draw it into that airflow. This is particularly important when you are vacuuming up particles like sand or dirt. The higher the water lifts up in the vertical tube, the greater the weight of dirt and debris a vacuum will be able to pick up and send through the vacuum. An average water lift measurement for a vacuum is around 85 inches, and SEBO vacuums average at around 90 – 95 inches.

The airflow and the water lift ratings together give you a much better idea of the suction power of a vacuum.

There are several features, like the suction motor protection, that SEBO designed in their vacuums that protect the machine from damage. When the airflow pathway is obstructed by a clog or a completely full filter or bag, depending on the model, the vacuum will either immediately shut down, or a bypass valve will open to allow more air into the motor compartment to cool it down. For all SEBO vacuums this reaction is thermally triggered, meaning that it has sensed an increase in heat in the motor compartment because it is overworking, due to the clog in airflow, and has reacted accordingly. To reset your vacuum after it has automatically shut down, you will need to remove the clog or change the bag or filter and wait for the vacuum to cool down before continuing to vacuum.

As an aside, don’t be concerned if the exhaust air leaving the vacuum is warm during normal use, particularly in the case of the SEBO Felix since the whole body of the machine is functioning as the exhaust filter. Warm exhaust air is normal and if the vacuum ever does become too warm due to a clog, the bypass valve will open to protect the machine from damage, or it will automatically shut down. In either case, you will notice that your indicators for an obstruction or full bag are illuminated.

This is a SEBO feature that allows you to choose how much suction you want to work with at any given time. It is usually in the form of a sliding increase/decrease button on the handle rather than an on/off switch. 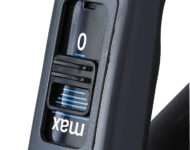 Why might you want this?  Variable suction control is useful for tasks like vacuuming rugs or curtains and other delicate things that you don’t want to fight from being sucked into the vacuum. This feature can be found on all SEBO Felix Premium upright vacuums and most of the SEBO canister vacuums, though it might not always be found on the handle.

SEBO vacuums have the ability to raise or lower the brush roller, depending on the height of the carpet pile, to ensure the correct distance between the brush roller and the carpet. The space between the brush roller and the carpet should be enough to provide proper agitation but not so low that it is wearing down the roller prematurely, damaging carpets, or even cutting off the airflow. As mentioned above, the airflow is important for being able to pick up dust and dirt so we don’t want to compromise that process in any way.

In most of the SEBO power heads there is a manual dial on the top where you can raise or lower the brush roller. To do this, we recommend starting at the highest level then lowering it until you no longer see the orange light on top of the power head illuminated, and only the green light shows. However, with that said, the SEBO Automatic X series can actually compensate for the brush wear automatically – hence the name Automatic X! It automatically monitors the resistance of the brush roll against the carpet and raises or lowers it whenever you change floor surfaces or as the brush roller wears. If you like the idea of never having to manually do this yourself, the Automatic X would be a great choice for you! 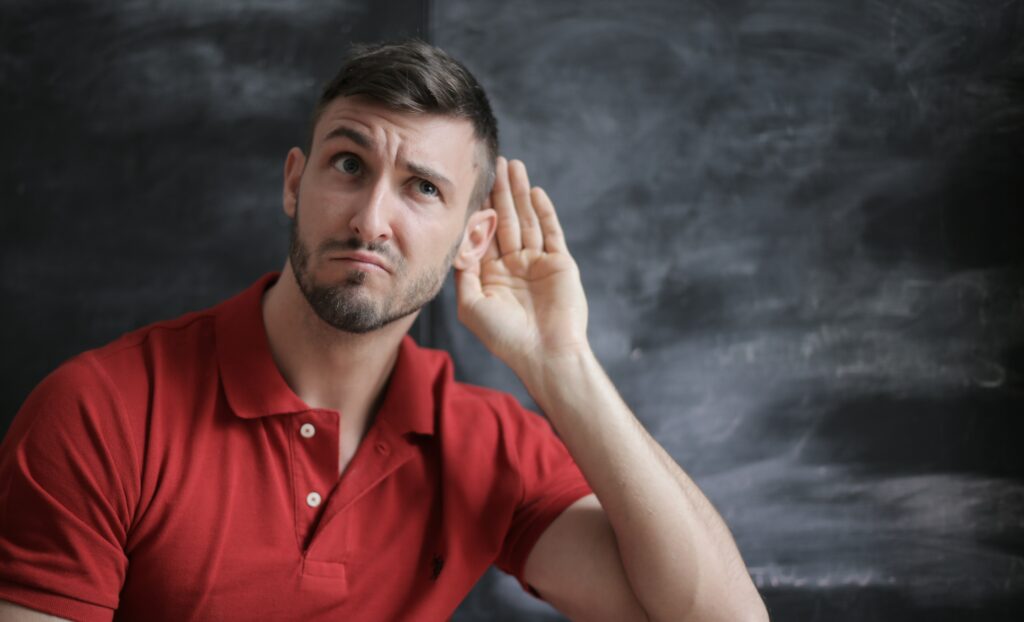 Sound level is usually measured in Decibels (dB) but you will notice that most of the ratings for sound on the SEBO website are measured in A-weighted Decibels (dBA). This unit of measure is used for sounds as they affect the human ear, which is more sensitive to mid-range frequencies rather than very high or very low ones. The conversion is confusing at best, so we can look at a couple of sources for safe listening levels. According to myhealth.alberta.ca and the American Speech-Language-Hearing Association, while some people’s ears are more sensitive to loud sounds, in general, sounds above 85 dB or 85 dBA can be harmful, depending on how long or how often you are exposed to them. Normal conversation and background music is about 60 dB/dBA, a whisper is about 30 dB/dBA, and a rock concert is around 120 dB or 112 dBA. If you frequently work with a leaf blower or chainsaw (106-115 dB), or a lawn mower (91 dBA), you might want to consider wearing ear protection as you may begin to experience hearing loss over time.

The average noise level of a vacuum is somewhere around 75 dB or 70 dBA, which is comparable to group conversation or the average radio. Most SEBO upright vacuums register around that average range for a vacuum, but, if noise is something that you are sensitive to, the SEBO canister vacuums are much quieter. At present, the SEBO E-series canister vacuums are the quietest in the SEBO line, particularly the E1 and E2, since they do not come with a power head. They register at approximately 58 dBA, which lands them around the sound level of a typical conversation or a dishwasher (60 dBA).

Now that you have a better understanding of these convoluted specifications, why don’t you check out the SEBO Technical Specification sheets below to compare each of our models and see for yourself why SEBO vacuums continue to outlast their competition time and time again! 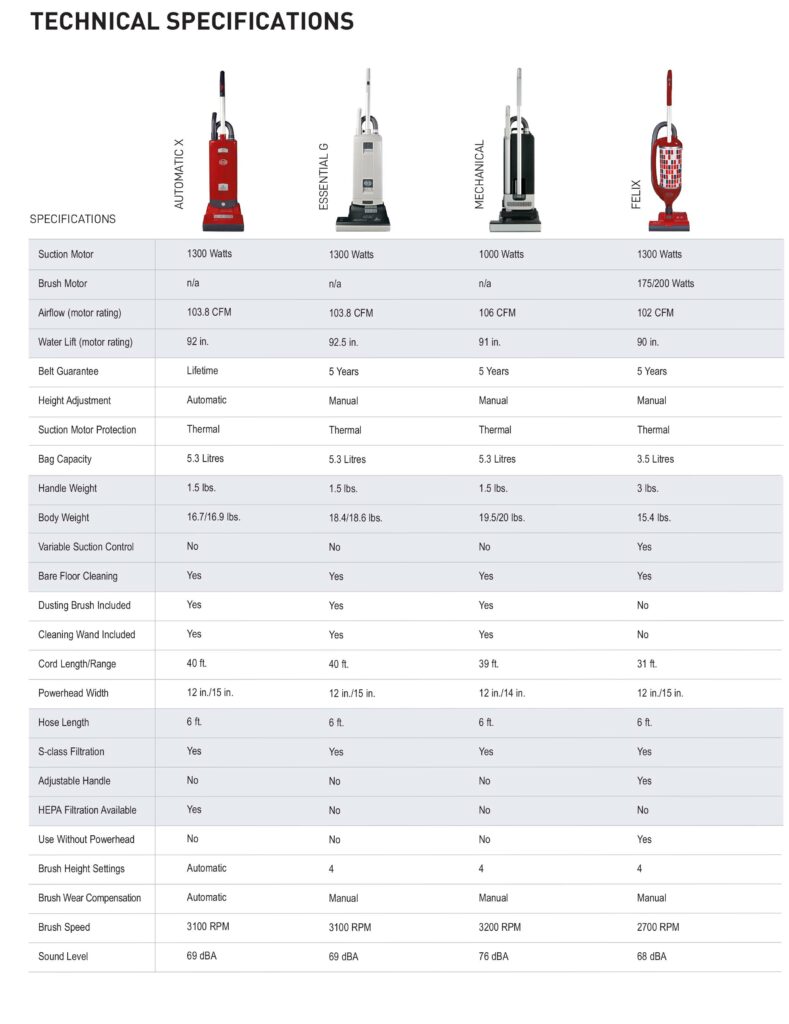 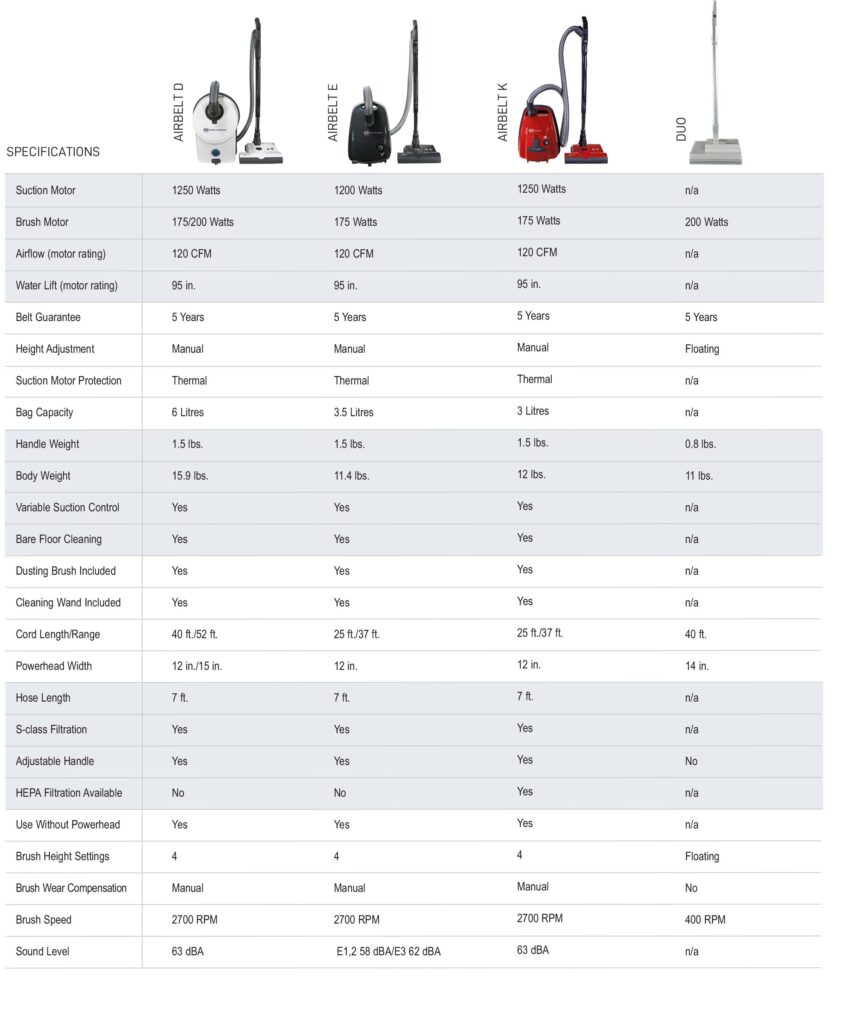